Play Ball! See a Giants Game During Your Spring Visit to San Francisco

Enjoy a game at AT&T Park, which was named the most beautiful park in professional baseball.

It’s that time of year again when baseball fans come from far and wide to enjoy a Giants game at AT&T Park. Their last World Series win was in 2014, and fans are hoping that this will be the year that they will repeat that success.

AT&T Park can accommodate tens of thousands of fans in its 41,503 seats, 68 executive suites, and 5,200 club seats. AT&T Park also hosts concerts and other special events, but for fans of America’s Pastime, it’s all about the Giants!

Tickets are not terribly hard to get earlier in the season, but as they draw closer to winning the pennant, more and more fans turn out to support them. As the season winds down, it’s not unusual for the stadium to sell out, especially if the Giants are doing well.

To ensure you get tickets and can enjoy the game in the seats you prefer, it’s wise to order your tickets in advance of your visit. If the tickets you want are not available, you can try secondary ticket sellers, such as STUB HUB. You’ll pay a premium on such sites, but hardcore fans will think it is well worth the price. Of course, the concierge at Hotel Union Square is happy to assist you in obtaining tickets.

To ensure you get tickets and can enjoy the game in the seats you prefer, it’s wise to order your tickets in advance of your visit.

AT&T Park was named the most beautiful in professional baseball by The Bleacher Report. Since so many people in San Francisco are vegetarians, the park offers amazing vegetarian food which is served alongside sliders, hot dogs, and other traditional baseball park favorites.

If you’re planning a stay at Hotel Union Square during the spring or summer, consider spending a day at AT&T Park supporting some of the city’s sports fans’ local heroes! 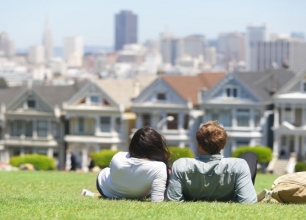