San Francisco is host to many entertaining events throughout the year! See this short list of the ‘7 Top Spring Time Events in San Francisco’ you are sure to enjoy!

No matter when you visit San Francisco, you can be sure that there will be an event, trade show or activity that celebrates something of interest to you.

Below is a list of just, ‘7 Top Spring Events in San Francisco’ - of course there are many more events for you to discover and enjoy during your next visit to San Francisco.

Mardi Gras
When: Tuesday, March 5, 2019
Where: Fillmore Center Plaza and throughout the city

The month of March kicks off with one of the most popular and most anticipated San Francisco Events: Mardi Gras!

This gathering will include known blues singers including Margie Turner, Alabama Mike and Bernard Anderson to name a few.  This is a true ‘New Orleans-style’ celebration that brings the Fillmore Music District to life with music, food and a colorful, family friendly activities.

A parade is planned featuring Sumba Funk, the Gumbo Band and the St. Gabriel Brass Band.  The Grand Marshall for this popular event in San Francisco will be New Orleans own Chief Takawaka.

Other smaller Mari Gras celebrations will be taking place across San Francisco at local bars, restaurants and entertainment halls. Expect to see, hear and experience lively Jazz performances at almost all the Jazz Clubs across the city.

Among the other key features of the Cinequest Film & Creativity Festival are the panel discussions and of course the chance to mingle with film stars, directors and other production and creative industry participants.

This festival will present projects from over 50 countries in film and technology venues and theaters around San Jose and Redwood City.

This holiday is celebrated with great music, authentic Irish food and of course a pint (or 2, or 3) of Ale at one of the many Irish Pubs located throughout San Francisco.

San Francisco’s St. Patrick’s Day Parade takes place on Second and Market Street with an estimated 5,000 participants who celebrate ‘everything Irish’ all the way to San Francisco’s City Hall located at 1 Dr. Carlton B. Goodlett Place.

In addition to the San Francisco St. Patrick’s Day Parade, guests can enjoy lively music, great Irish food and other arts and crafts vendors, along the parade route and in other areas of the city.

Spring time in San Francisco is kicked off by this popular annual event that is focused on inviting consumers, Wedding planners, Event planners, Designers and more to see what is new and next for all things related to flower displays and plant design.

The San Francisco International Film Festival presents up to 180 films from 50 countries and includes presentations of numerous awards and prizes, classes, exhibits and panel discussions.

Heading into its 63nd year, the San Francisco International Film Festival will attract approximately 70,000 film enthusiasts at this year’s events.

What could be better than a full day celebrating Mexico with great Mexican food, music and the culture of Mexico?

Cinco de Mayo is celebrated officially on May 5th, but there is an amazing event, the 2019 San Francisco  Cinco de Mayo Festival will be held on Saturday May 4th, 2019 on Valencia Street between 21st and 24th Street.

Come and enjoy all the great Mexican food provided by numerous vendors, arts & crafts vendors, exhibits and of course the fantastic music and other entertainment and Margaritas.

This popular and long running event will present over 60 performances in the categories of dance, theater, and music groups representing 11 countries, the U.S. and of course the Bay Area.  The San Francisco International Arts Festival also features related exhibits, music, food and other outreach activities. 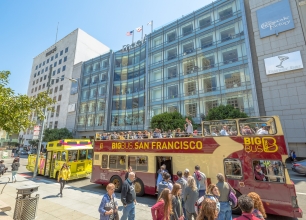